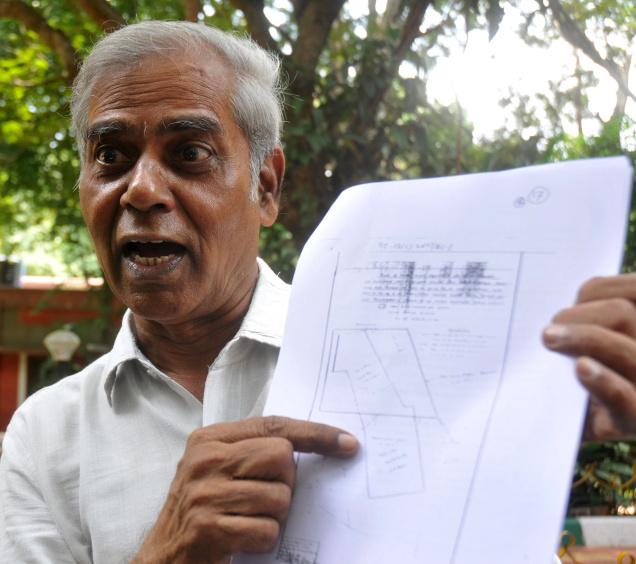 Link to the talk RSVP and information page

Mr. Hiremath does not own any of the modern amenities, a living legend, who travels in a Second Class Railway compartment, carries his own luggage, books and documentation. He argued the case single handed in the Central Empowered Committee and also in various foras across India, which led to the liberation of thousands of acres of public resources.

Since going to the United States in September 1968, Mr.. Hiremath was active with various community organizations, especially those relating to India’s development from September 1968 to June 1979 till returned to India. He took a leading role in organizing education seminars in various parts of the United States on setting up small industries in India. Also worked on organizing meetings/workshops/conferences on Rural Development in India. This work was instrumental in establishing contacts in India, the United States, the United Kingdom and several developing countries, with both voluntary and Government groups.

His work with protection of human rights and restoration of democracy was significant enough to attract the attention of the Government of India which lead to impounding of his passport during the ill-fated emergency declared by the then Prime Minister Indira Gandhi.

The pioneering work of IDS, when Mr. Hiremath was its president, includes founding of an effective Federation of Voluntary Organizations in Rural Development in Karnataka, FEVORD-K. The Federations was started in 1981 and is serving more than 120 member organizations by providing training programmes, liaison with the Government on issues of environment and rural development. This work lead to recognition of IDS by HIVOS, the Hague, the Netherlands. They awarded "Jaap Van Praag", an International Prize, in 1982. Mr. Hiremath continued as the Chairman of the FEVORD-K Committee on Common Lands and Forestry for peoples needs (1986 to 1997) and has recently served as the Chairman of the Committee on Grassroot Advocacy. He was honoured for his significant services to the Federation the as Founder President during the 10th year anniversary of FEVORD-K.

Mr. Hiremath was one of the founding members of Samaj Parivartana Samudaya (SPS) Dharwad, Karnataka. He was the President of SPS from January 1983 to April 1986. In November 1984, he was appointed the Coordinator of SPS, the position he holds to date. SPS has membership from different parts of the country and is now concentrating mainly on environmental issues and alternatives in development. It has taken up several issues relating to protection of environment and human rights. These include (a) pollution of the river Tungabhadra in Dharwad District, (b) the wasteland development with watershed approach, (c) protection of common lands, (d) the well known Save the Western Ghats March from November 1, 1987 to February 2, 1988 and (e) the Right to work campaign with Employment Guarantee Scheme (EGS). It also facilitates people’s participation in decision making and execution of large forestation projects funded by bi-lateral agreements between governments and foreign funding agencies.

Under the leadership of Mr. Hiremath, SPS used all avenues, including advocacy and legal court battles, to successfully stop the Birlas-owned Harihar Polyfibers (HPF) from exploiting 75000 acres of forestland for industrial purposes, which would have deprived 500,000 villagers in six districts of their basic necessities. The work of SPS has received recognition nationally and internationally. The Prime Minister of India gave SPS the Indira Gandhi Paryavarana Puraskar for the year 1989, the highest award of the Ministry of Environment and Forests, Government of India. One of the major works of SPS, "Kusnur Satyagraha", was featured on Doordarshan (a national TV network) as a 30 minutes episode under their Citizen and the Law Series in 1989. It was based on the success story of the people’s movement for reclaiming 75,000 acres of common lands. "Kusnur Satyagraha" was specially mentioned in the 1989 report of the U.S.A. based World Watch Institute.

He was the convener of the National Committee for Protection of Natural Resources (NCPNR), with membership of over 30 leading NGO’s from various parts of India, against the move of Hon. Kamal Nath, the Minister of State for the Ministry of Environment and Forests, Government of India. The committee successfully stalled his move to give away 2 million hectares of forest and common lands for industrial and commercial purpose. This was a very significant victory for the effective collective action coordinated by Mr. S.R. Hiremath and SPS, under the auspices of NCPNR.

Mr. Hiremath was a Co-convener (1991-92) and the Convener (1995-97) of Jan Vikas Andolan (JVA), a national network of over 300 groups, to prevent lop-sided development and promote sustainable development. Mr. Hiremath has been involved very actively with a major campaign "Azaadi Se Swarajya" (from independence to self-rule) during the 50th year of independence with focus on "People’s Rights Over Natural Resources".

He is co-editor of the books: (1) All about Draft Forest Bill and Forest Lands: 2) All about Convention on Biological Diversity (CBD), and (3) Forest Lands and Forest Produce as if people mattered and contributed to the books:(i) Amended Draft Forest Bill 1995: Voluntary Organizations (ii) Land Acquisition, Rehabilitation and Resettlement Bill, 2000(Voluntary Organisations) and Peoples’ Rights over Natural Resources: putting it on the National agenda and author of the booklet "Azaadi Se Swarajya" campaign during 50th year of independence.