Petition for protesting rape and murder of 16 year old

Original petition can be found at www.aidindia.org . This petition will be sent to the mentioned ministers. 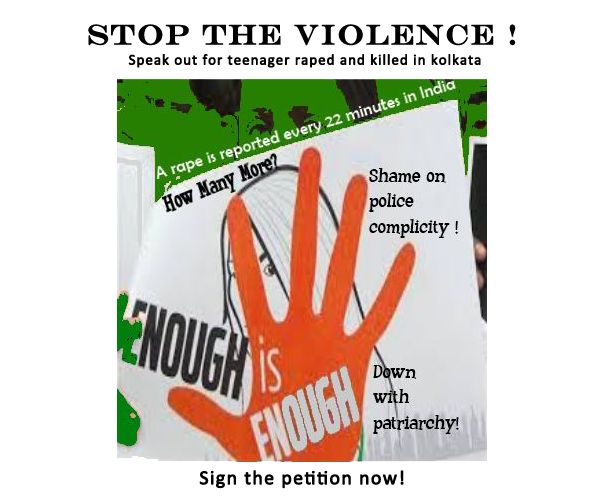 We, the undersigned, condemn the barbaric rape and murder of the 16 year old girl from Madhyamgram, West Bengal. We further condemn the complete inability of the state administration to protect her after she filed a police complaint on Oct 26th, 2013, which resulted in her being abducted and raped again by the friends of the original assailants. On Dec 23rd the girl was set on fire in her house allegedly by the rapists and she succumbed to her burns on Dec 30. Subsequently, in a cover-up effort, police attempted in shameful manner to seize and cremate her body without her family’s permission which we unequivocally condemn and protest as well.

This latest Kolkata incident is among several shocking incidents of gender violence where state authorities have either been party to the violence themselves, as in the case of Soni Sori in Chattisgarh, or woefully failed in their duties of providing basic security to survivors and thereafter attempted cover-up operations.

The gruesome 2012 Delhi incident is still fresh in our memories and we are
acutely dismayed to see the continued callous behavior of the state in matters of gender violence.

We hereby urgently demand the following –